If I don’t have anything to write about on my blog, I usually do some browsing and find some incredible links and share those instead. If you’re taking the time to return to my site or subscribe to my feed, I want to ensure I don’t waste your time by half-assing a blog post.

Despite my efforts, some of my posts are stinkers and others get a ton of attention. After blogging for years now, it’s still impossible for me to predict my readership. I suppose it’s a lot like a defensive running back trying to predict the next play. Football teams that win usually have greater consistency and fewer fumbles. They play every down like it’s the last down. Football, they say, is a game of inches.

Winning at blogging is the same. A great offensive line can still get sacked and lose some yardage, but overall, they’ll push onwards and get the first down. I can’t predict which of my posts (football = plays) will get me into the end zone. I do know that greater consistency and less fumbles will get me there, though. 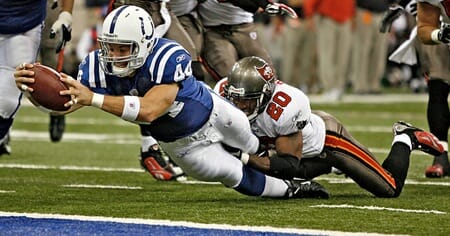 In 2008, the blog has about a quarter of a million visitors with close to 2,000 subscribers (email + RSS). I’ve not continued the growth on this blog that I had in the past – largely due to my competition. Changes at work didn’t allow me to put the time and effort into the blog that I should have. Of recent, I’ve been turning around those stats and am back on the upswing again.

I’m looking forward to getting a few in the end zone in 2009!