I believe that I am in charge of my own happiness. There are a number of outside influences (money, work, family, God, etc.) but in the end, it’s me that decides whether or not I am happy. 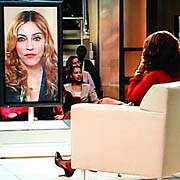 This morning, I watched the news and it’s plastered with Madonna on Oprah explaining her adoption of a child from Africa. What struck me the most is the statement by many people that this was a great thing for Madonna to do that will bring happiness to the child.

I’ve whined about this before on my site, but this is simply ridiculous. Why does our society always confuse intelligence, talent, and happiness with wealth? So Madonna will make a better mother because she’s wealthy? Perhaps the orphanage that the boy was at had fantastic people that loved and cared for him. No doubt, but I’m quite confident that he’ll have a caretaker under Madonna. So, what’s the difference?

Money is going to make this child happy? Are you sure? Have you ever seen some of the lives of children of rock stars or very wealthy people? Many of them are in and out of rehabilitation and struggle their entire lives to make a name for themselves. Wealth brings an entirely new set of problems into a life (problems that I’d like to have, though). As well, would you want to have Madonna as a Mom? I wouldn’t! I don’t care how much money she has… I’ve seen too much of Madonna in my lifetime to really respect her.

Just maybe this was more about Madonna’s happiness than the child’s. It’s unfortunate, but I’m guessing that this is the case. I can not believe a child that is removed from his culture, his homeland, his family stands a chance at happiness with a jet-setting Rock Star as a Mom.

What if, rather than shopping for a child, Madonna had simply set up some long-term investments that facilitated better education, resources, and industry for the region she visited? She may have influenced many more peoples’ happiness. Perhaps the child she adopted would have been happier that way.